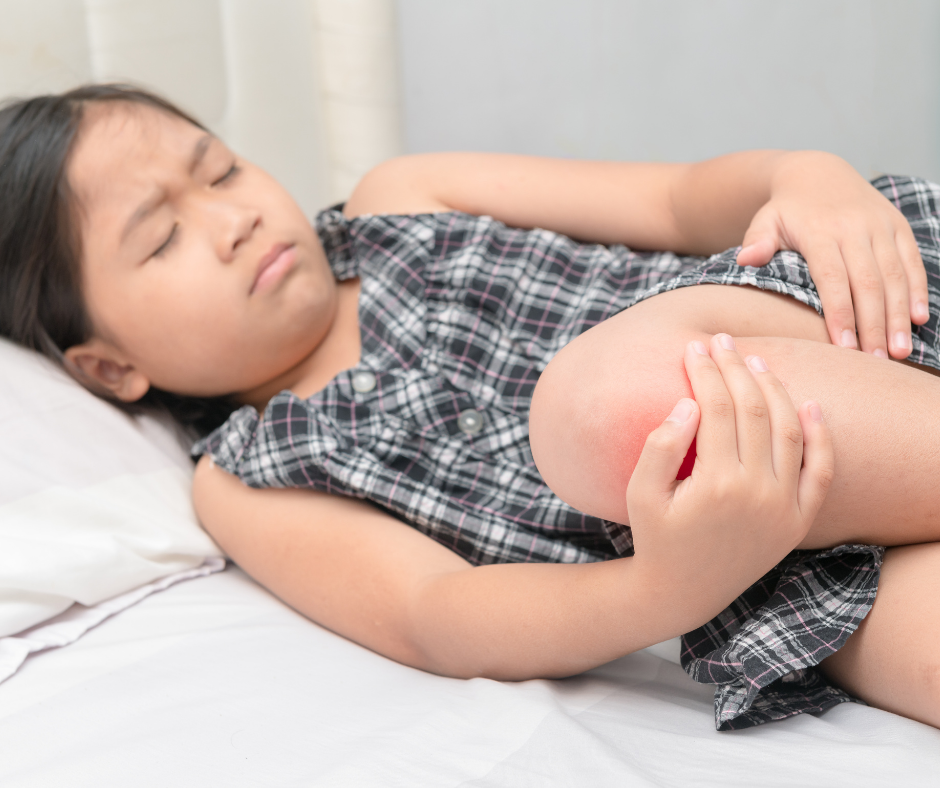 Growing pains are painful and restricting medical conditions that affect children most often between the ages of 8 and 16 years. There’s a common misconception that there’s nothing that can be done when growing pains develop and that they’re a natural part of ageing in kids, but this isn’t the case at all. Growing pains are very much treatable once they start – and something that we commonly help families with here at Masterton Foot Clinic.

While bones are growing bigger and longer, every bone has areas called growth plates to which the body adds new bone. Taking the shin bone (tibia) as an example, its growth plates are located both at the top and bottom of the bone: 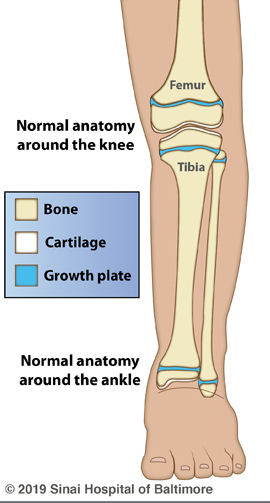 These growth plates are weaker than the surrounding bone, making them more vulnerable to damage when stressed or strained. This is exactly what happens with growing pains.

The excess stress or tension on the growth plate is often caused by the muscles and tendons that connect to the bone around the growth plate. As we grow and our bones lengthen, our muscles need to keep up and grow and lengthen at a similar rate. When they don’t, tight muscles can pull on our bone, especially when we’re active during exercise, irritating the growth plates and resulting in pain and swelling.

There are three areas at the feet and legs where growing pains most often present: at the heels, the knees, and the midfoot. We’ve detailed each of these below.

Adults don’t experience growing pains because when our bones mature, the growth plates turn into solid bone, and hence we don’t grow any bigger.

This is the most common growing pain that we see and manage. Don’t worry about the term disease – it’s a condition that is present until the cause is addressed. Here, the growth plate at the back of the heel is damaged and irritated from the repetitive pulling and strain by the Achilles tendon, the strongest tendon in the body, that attaches to the very back of the heel, close to the growth plate.

Running sports place a great demand and load on the Achilles, and low-set shoes like soccer boots and activities that point the toes upwards (towards the sky) can exacerbate this load. The result is mild to severe pain at the back of the heel that can stop your child on the field mid-game, and see them limping off. 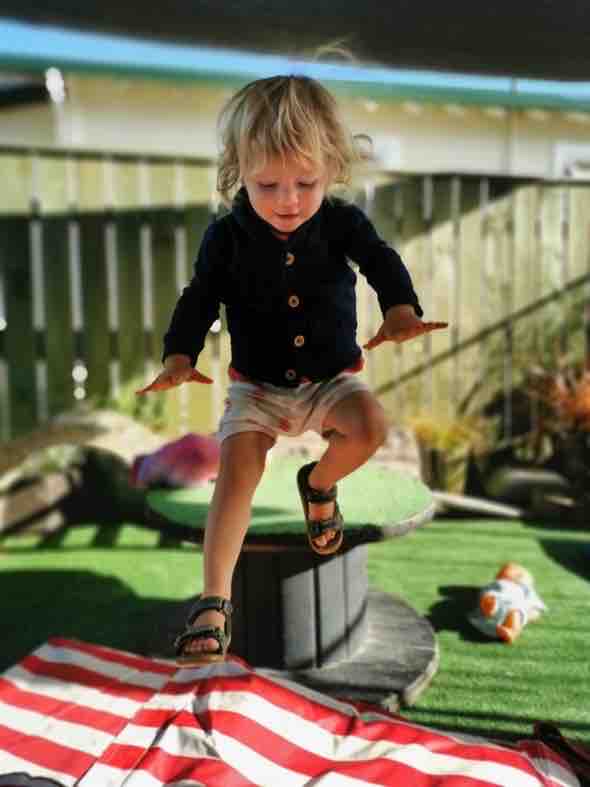 This growing pain affects the knees and involves the growth plate at the very top of the shin bone (tibia), as illustrated above. The stress comes from the patellar tendon that runs from the thighs (gastrocs), across the knee, supporting the kneecap, and attaches to the top of the tibia close to the growth plate.

Tightness and problems with the gastrocs are a common culprit, as well as engaging in repetitive high-impact activities like running and jumping. The result is pain and swelling just below the kneecap which worsens when bending and straightening the knee. Pushing down below the kneecap is also likely to produce pain.

This pain presents on the outer border at the middle of the foot, affecting the base of your fifth metatarsal (the long bone of the foot, connected to your pinky toe). Here, the associated tendon is the peroneus brevis – but don’t worry about remembering that name. Just know that if your child starts feeling pain along the outside of the foot that may be accompanied by swelling, or they start walking on the inside of their foot or limping to try to avoid pain, then this may be the cause. Like knee and heel pain, their symptoms will be aggravated with exercise (and tight, narrow footwear) and will feel better when they rest – until they start running and being physically active again.

Here at Masterton Foot Clinic, we are able to treat growing pains and help reduce the likelihood of them returning next season by addressing the cause of the irritation to the growth plate – the tight muscles or tendons. We do this by working with your child to lengthen the specific tight musculature, while treating any damage that may have already occurred to reduce the pain. Without a tense and tight muscle to pull on the bone, there is nothing to irritate the growth plate, and so no reason for the pain to start.

For many children, orthotics are also an important part of this treatment, as it is their foot alignment that is a great contributor to the excess strain. The final treatment is carefully prescribed following an assessment of the feet and legs, which every child with foot, leg or knee pain receives. Here, we’ll also look at their footwear, muscle strength, the range of motion in their joints, their gait pattern, and much more.

Can you get growing pains as an adult?

Why do some children get growing pains and not others?

Growing pains are related to both the musculoskeletal system and having tight tendons that pull on bones, as well as a child’s physical activity levels that can exacerbate this pull and strain to a level that causes pain and damage. Some children may have muscles and tendons that lengthen at a faster rate, may do regular stretches to help support lengthening muscles and tendons, or may have hypermobile joints and tissues, so may not experience the tight pulling that can irritate a growth plate and lead to the onset of growing pains. Others may have a lower level of physical activity.

You say active kids get growing pains but my child doesn’t play that much sport – can her pain still be caused by growing pains?

Yes, while growing pains are often seen in active kids, with symptoms coming on during or after sport, not all kids who experience growing pains are very active or sporty. If the muscles are very tight, even the pulling and strain from regular walking and movement may be enough to irritate the growth plate.

Is it true that growing pains are inevitable and we have to wait for them to get better on their own?

Not at all. Growing pains are very treatable, and a common complaint that our podiatrists work with. We’ve provided a description of exactly how we treat growing pains above.

Does my child have to miss out on their favourite sports while they have growing pains?

We will always work to help get your child back to playing their favourite sports as quickly as possible, but the key is enabling them to do this safely and in a way that is sustainable for the long-term. This may mean missing out on some games temporarily, or changing their position in the games to minimise the strain on their body, but in return they can participate in the rest of the season once their pain has subsided. Ultimately this varies greatly on a case by case basis, and we’ll let you know during your appointment what the best way forward is for your child. Having children of our own, we know how important sports and playing with their friends is.

How long does it take to recover from growing pains?

In our experience, we are able to reduce the pain further and further on an almost weekly basis, and can help your child resolve their pain completely within weeks or months. This greatly depends on the location and extent of the pain, as well as how closely the treatment plan is followed.

Can growing pains be prevented?

There is nothing that can definitively prevent growing pains. With that said, there are things that can be done to help reduce the likelihood of growing pains, like stretching well before exercise, wearing good supportive footwear, and using custom foot orthotics to promote good foot posture and biomechanical function.

How do orthotics help with growing pains?

Your child’s foot posture and function may be impacting the stress and strain on tendons, which can exacerbate the pull on the growth plate. By using orthotics to support an optimal foot posture, the tension can be reduced, therefore helping to reduce your painful symptoms.

How early can a child get growing pains?

As early as preschool, around 3-4 years old.

This depends entirely on your insurance policy and your level of cover. If your policy covers your child for podiatry, then it is likely your insurer will be able to assist. Please contact your insurer directly to confirm.

Generally, no. This is because growing pains aren’t an accidental injury, but a temporary and common growth-related condition.